Today, Blue class were given electrical components and a design specification.

They had to create an electrical buzzer game for a funfair. The player must try to move a metal loop along a wire without making the buzzer sound!

Pupils encountered many problems along the way that they used their knowledge to solve. Once they all were successful, it got very noisy!

Wolves in the Walls!

Blue class had a visit from the 'Wolves in the Walls' today! They trashed the classroom, covered the tables in sticky jam and could be seen peeking out from the classroom walls.

What a super class they are! Blue class instantly stepped in to tidy up our learning environment and to make sure their teacher was alright!

Debating a motion and sharing our opinions kindly

We have been learning about the 'Just-So' story of How the Rhinoceros got his skin. He had been unkind to the Parsee by eating the Parsee's cake. The Parsee got revenge by rubbing the Rhinoceros' skin full of cake crumbs. These would itch for all of eternity.

Our motion that we debated today was:

Do you agree with the actions taken by the Parsee?

Our class started out in neutral ground and each pupil got to state their opinion and give reasons. As pupils heard the arguments for and against the Parsee's actions, they could move towards each side of the class to show their strength of feeling towards 'agree' or 'disagree'.

We had some very powerful persuasions and a lot of changes in opinion!

The great 'Parsee vs Rhinoceros' debate! 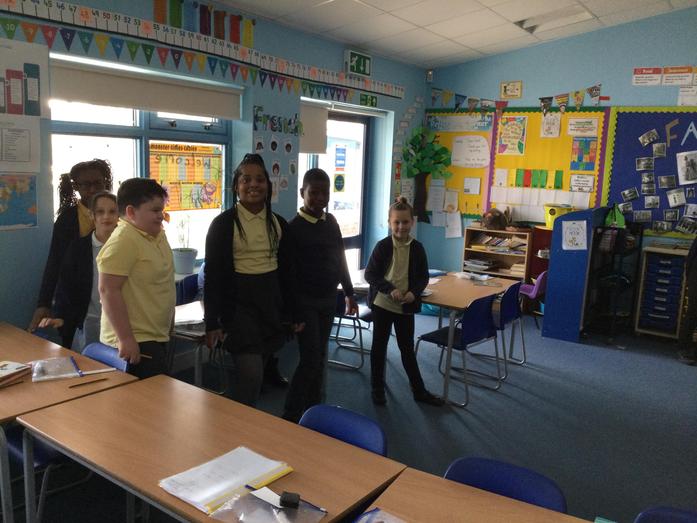 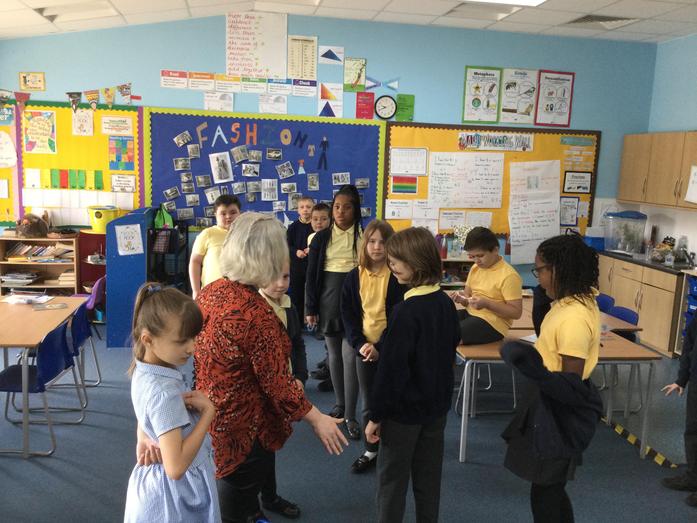 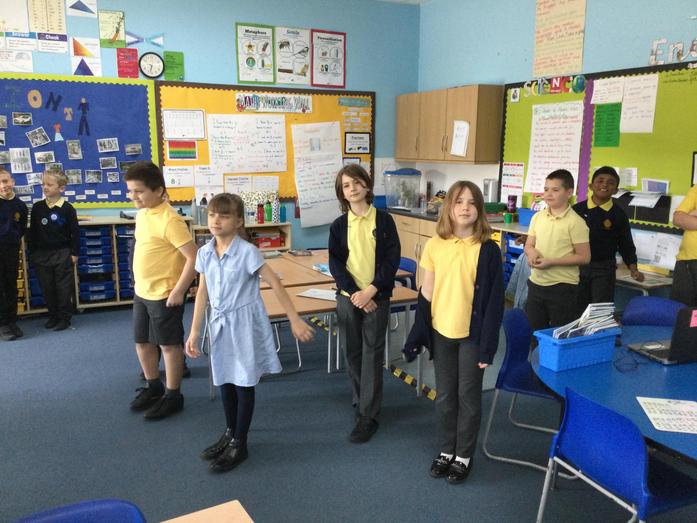 Working together to understand Electricity

Blue class have been learning about electricity and participated in some drama that became real with the use of a circuit ball.

We began by passing paper electrons to circuit components. Our volunteers had to receive electrons and show that they were working. We then demonstrated the instant effects of turning on a circuit by using a rope to show the pull of electric current from negative to positive.

Using the circuit ball, we all became part of a real circuit, with our hands becoming switches to control whether it would turn on or not.

Pupils thought about the components of our circuit, and designed what they imagined the circuit would look like inside the circuit ball.

We love science and we are so excited to design and create some more circuits!

Blue class has been working hard to keep our school grounds tidy. We care about biodiversity and we want to ensure that our local and wider environment is habitable for all creatures.

Today Blue class made a indoor snowman. We decided to see how long the snowman would take to melt indoors. We used a timer whilst we carried on with our work. We noticed changes over time and we were surprised at how long it took to melt completely. 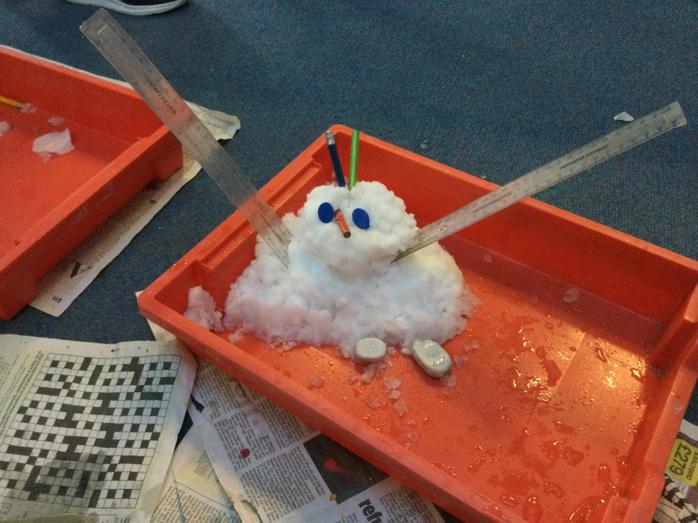 Today, we had a lot of fun in class. We read our new books that have been dropped off by the library, we invented a game called 'Capplications' and one called 'Inverse Jeopardy' in mathematics and had a lovely book talk about the Dragon Slayer in English. 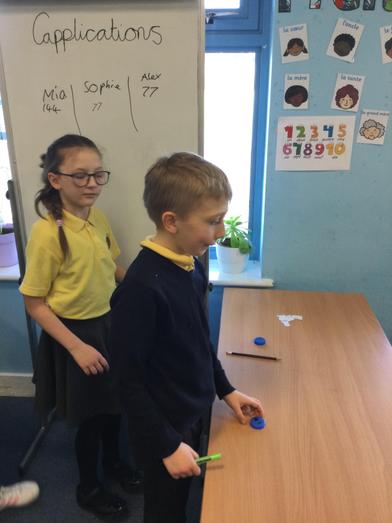 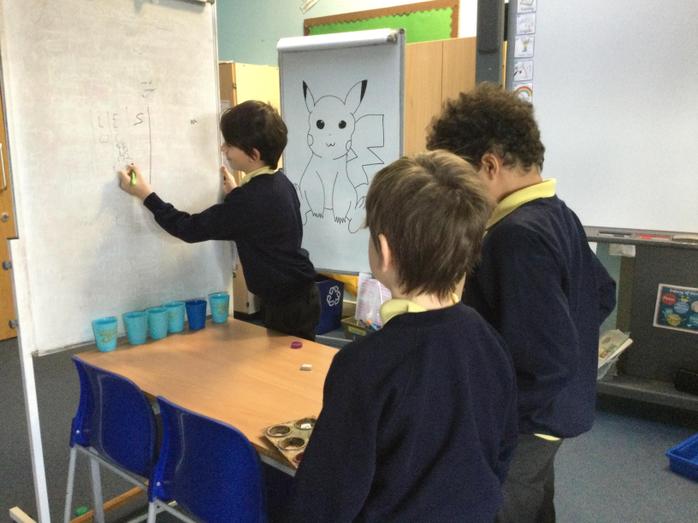 In the afternoon, we finished off our dragon collages, adding texture to our lovely dragons. We then used our skills of design and teamwork to create a background for our display board. As one big team, the children discussed, collaborated and created the giant masterpiece that our dragons will be displayed on. 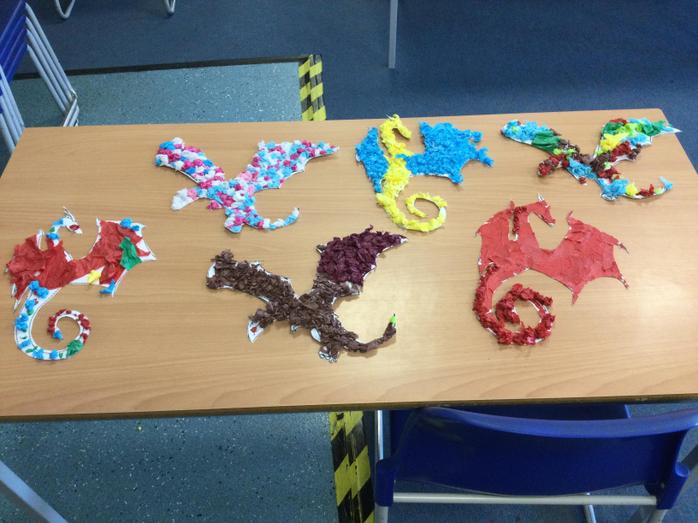 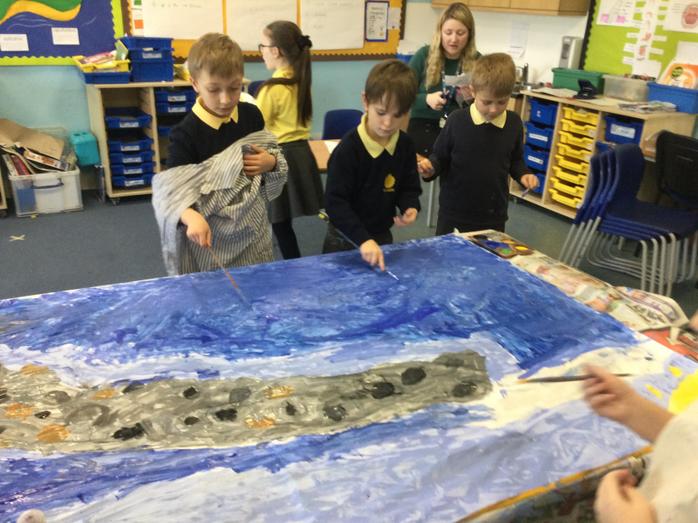 We managed to incorporate a coastline from our Theme work, dragons from our English and a lovely lighthouse symbolising Incarnation and the Light of Jesus. We also included a breakwater, like the one from The Mousehole Cat, a book that we have read during our reading sessions.

I think you will all agree that we have been very creative!

We have missed you all at home and we can't wait to see how you used your creative day.

We studied the work of impasto artists Conrad Jon Godly and Ana Maria Edulescu. Using impasto techniques, we created fantastic Christmas cards using knives, forks and spoons to apply paint and add effects. Ana Maria Edulescu was very impressed with our work and emailed me to inform me that she thought our techniques were a huge success. 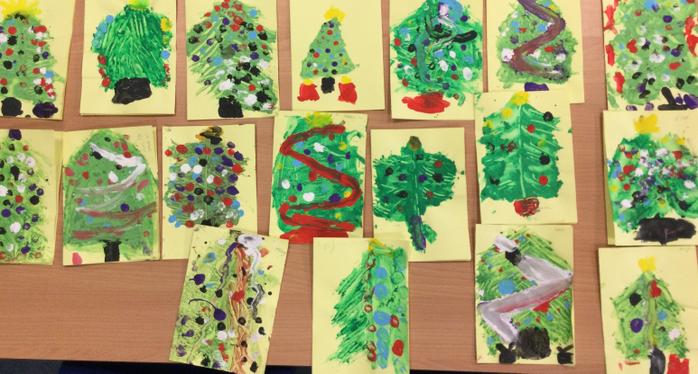 At the culmination of our Egyptian theme, we designed and created our own Pharaoh headdresses, armbands and jewellery. We had a fabulous time showing off our treasures and dancing to Egyptian music.

We have had a fantastic day in Blue class. We began with a magical visit from Mrs Ptashenko. She prepared a beautiful session based on the Nutcracker ballet. We watched some of the Russian ballet and played lots of fabulous games including a feely box game, Nutcracker charades, guess the dances and an art session. 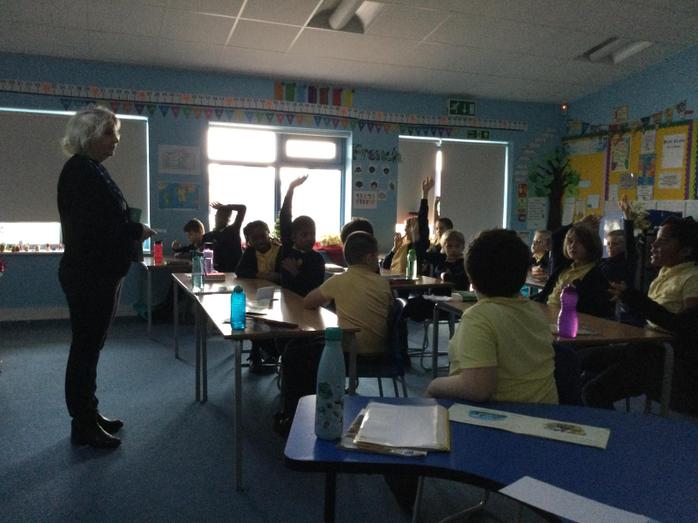 Thank you Mrs Ptashenko for keeping us enthralled with your amazing storytelling skills. We were enchanted.

At church, the pupils performed the 'Zither Carol', after a very sensible walk to the church. It sounded beautiful and we cannot wait to be able to show you the finished video. They worked very hard to learn their lyrics and earned some extra playtime, followed by a lovely assembly where we watched the nursery's Nativity performance.

On Your Marks, Get Set, Go!

Whilst exploring the properties of liquids within our 'States of Matter' work, we explored viscosity (or resistance to flow). The children planned a fair test, to determine which liquids were most viscous, resulting in liquid races! 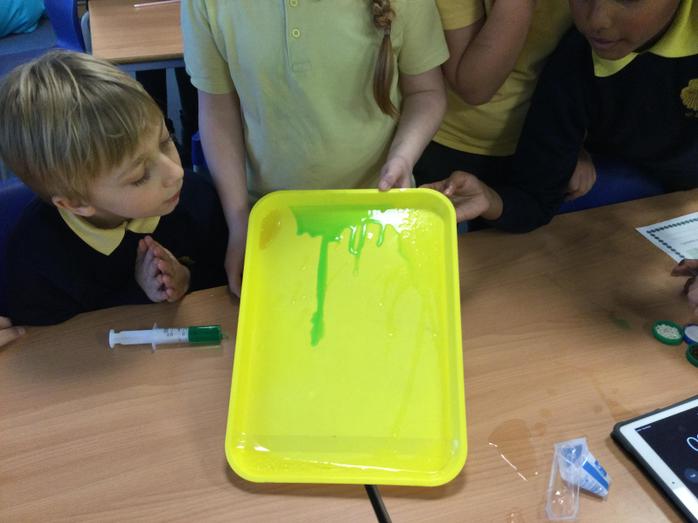 We discovered that water was the least viscous of the four liquids we tested,  with honey resisting flow the most.

Today, year 4 experimented with changing states in a real world context. We performed a delicious experiment, observing the changing states of chocolate, measuring the melting point and the state at room temperature. We compared this to our knowledge of the behaviour of water. Some of the questions that arose really interested us! We really are amazing scientists! 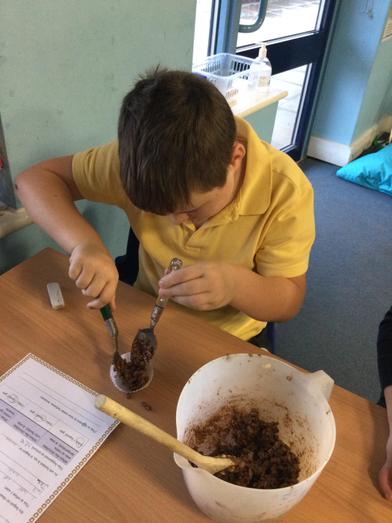 This afternoon, Blue class have been discovering how archeologists find evidence about civilisations from artefacts left behind.

The children discovered facts about two families (the Smiths and the Bridges) from their (clean) rubbish. They determined their diet, that they had electricity, the languages they spoke, their education, whether they had domesticated animals and a little about their lifestyles too. 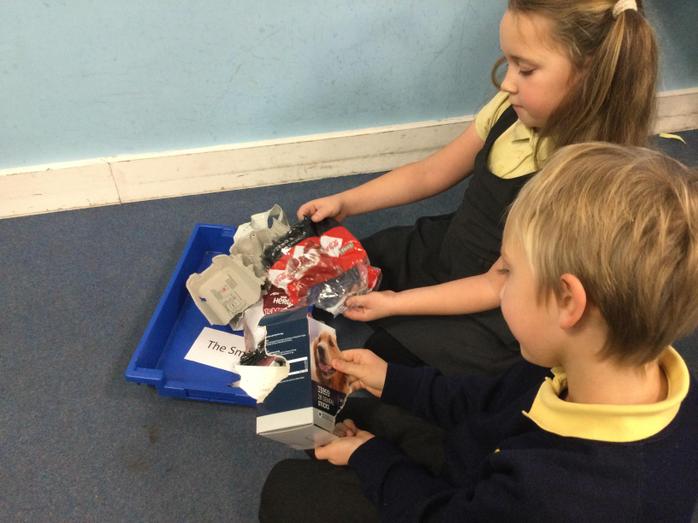 The children had a fantastic day with Mrs Ozbeser on Wednesday. We celebrate No Pens Day with performances of poetry, painting and maths games. Everybody learned new skills and had a lovely day, with no pens in sight! 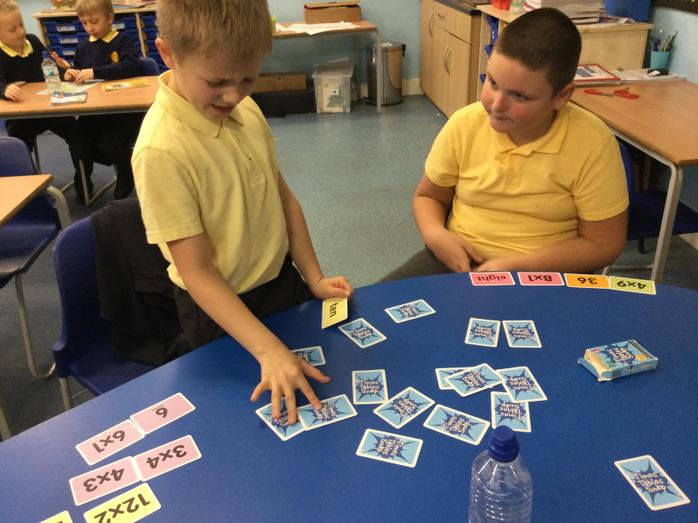 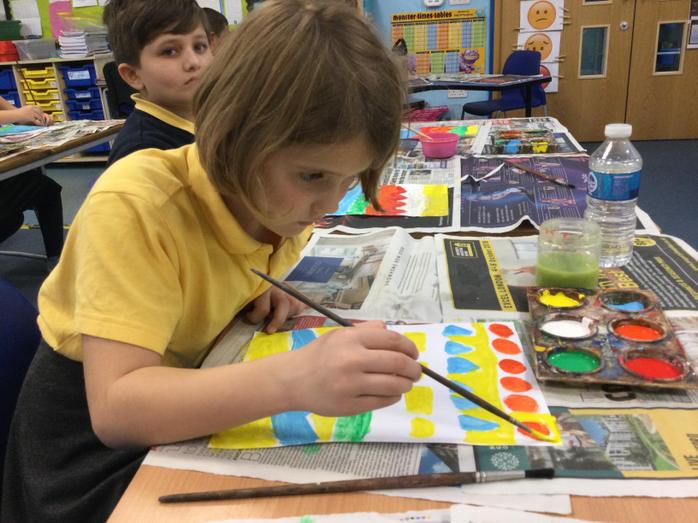 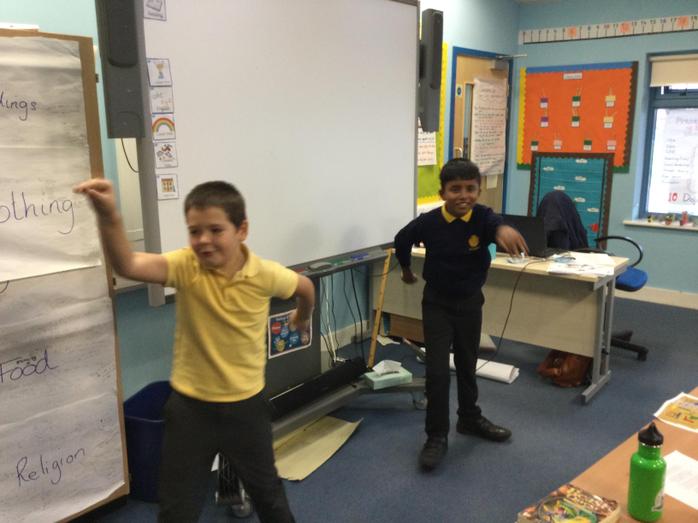 Today, Blue class were treated to two songs with very different tempos played by Mrs Richards on her violin. The vocabulary that the children used was fabulous, with one child even describing a melody as 'melancholic'! We are appraising a variety of different genres this half term and using 'wandering colours' to depict our feelings whilst we listen. 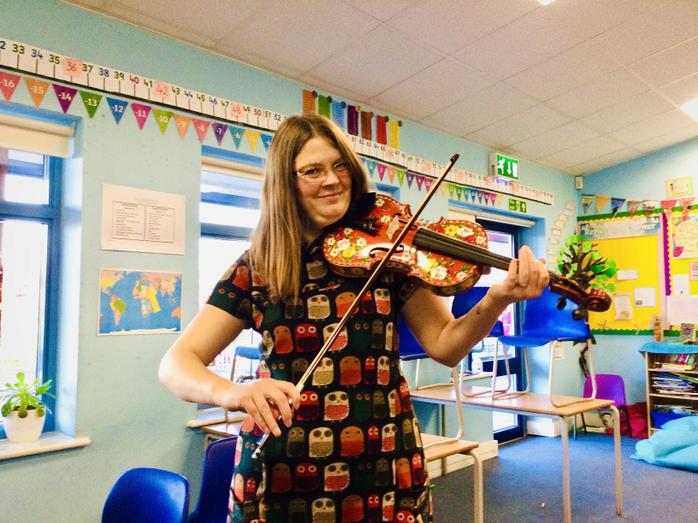 Today, Blue class painted the amazing Canopic jars from a recent theme lesson. We learned about tone and how to blend colours to create shades. I think we can all agree that the class have worked very hard and produced some imaginative jars. 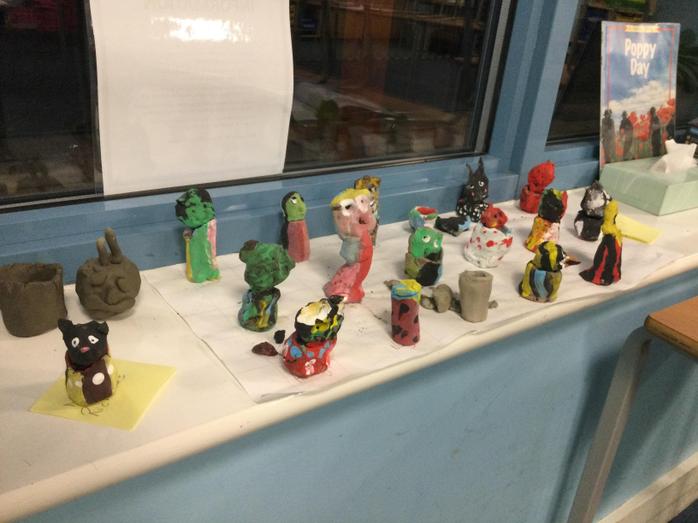 Blue class enjoyed a session where we learned to keep the beat of a piece of music. We played along to 'Count By 6' - a popular song to learn times tables. We used our hands to keep a beat and clapped out rhythms that would fit inside the pulse.

We then practiced these with instruments, using the 'call and response' techniques. The children were confident enough to perform their own rhythms. 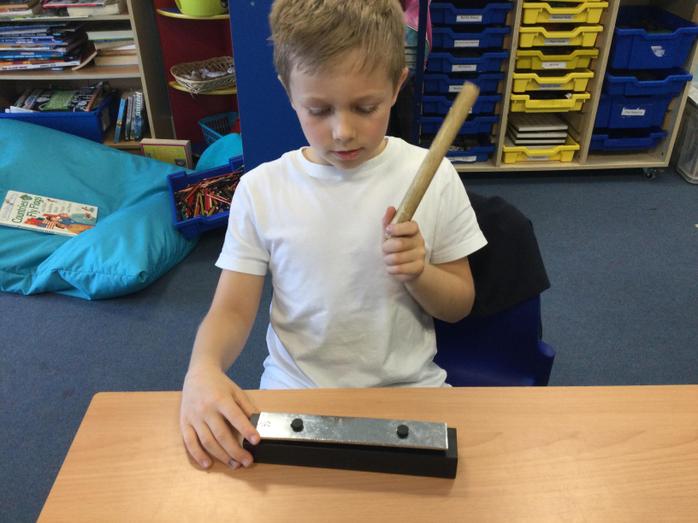 Today, all three classes helped to mummify Mrs Patrick so that she would be preserved for 3,000 years. It was gruesome work, but fortunately it was only pretend!

We used canopic jars to keep the important organs in, but threw away the brain, as the Egyptians thought that it was not important.

We learned that the process of mummification taught priests a lot about the human body. This changed the practice of medicine for the rest of history! Priests were able to find out about organs in the body and develop methods of surgery that were recorded on papyrus and taught to doctors! 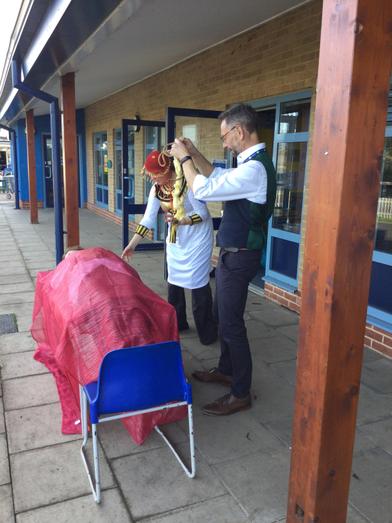 During one of our class conversations, we discussed how our choices as consumers can effect the development of foods and how we have lost some of our variations due to buying the same things. The children didn't believe me that carrots weren't always orange.

I sourced some heritage carrots from a farm shop and the children were very brave. All tried a carrot. Some chose purple, some chose white and some stuck to the more familiar orange. The reactions were mixed, but all found it an interesting experience. 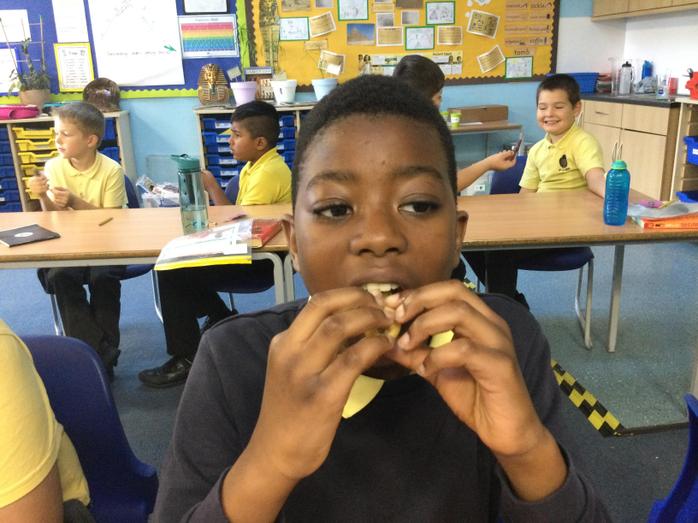 Blue class have had an exceptionally exciting half term.

We have been studying habitats in science and went on a minibeast hunt around the school. We discussed adaption using playdough blobs and looked at the positive and negative effects of humans on the environment. We decided that our choices can have a big effect on habitats both near and far. The class decided we would keep laminating to a minimum.

In ICT we created stop motion movies about protecting the environment, using recycled materials and classroom objects to minimise the environmental impact of our learning.

Our English work has been varied. We began by discussing the story 'Can I Join Your Club' before moving on to some extremely exciting descriptive writing about Tadeo Jones. A magical broomstick arrived in class, delivering a diary extract from Harry Potter - a very memorable experience! More recently, we have been working on our 1st person writing by imagining that we are Howard Carter, first opening Tutankhamun's tomb. We are now moving on to some non-chronological reporting and instruction writing.

In Maths, we have been busy learning about place value, working with 4 digit numbers. We have been using stem sentences to try to explain our learning such as: 'I know that...' and 'I can check my answer by...' We have been working to learn our times tables, often using packs of cards to practice. We are moving on to some addition and subtraction during this half term.

Our theme topic is an interesting one. The 'Temples, Tombs and Treasures' work has really captured the imaginations of the class and we have produced some fantastic work. We have rolled wooden blocks using pencils, attempted to be the foreman directing the class to build a pyramid, mummified oranges and even produced our own canopic jars!

We looked at 'Creation and Fall' in RE, to help us understand the concepts of love and forgiveness. We have thought about the 'ripple' effect that our actions can cause.

We have been appraising a variety of music from many different cultures and have had a fabulous drumming workshop using 'Djembe' drums. We have been looking at pitch, tone and tempo. 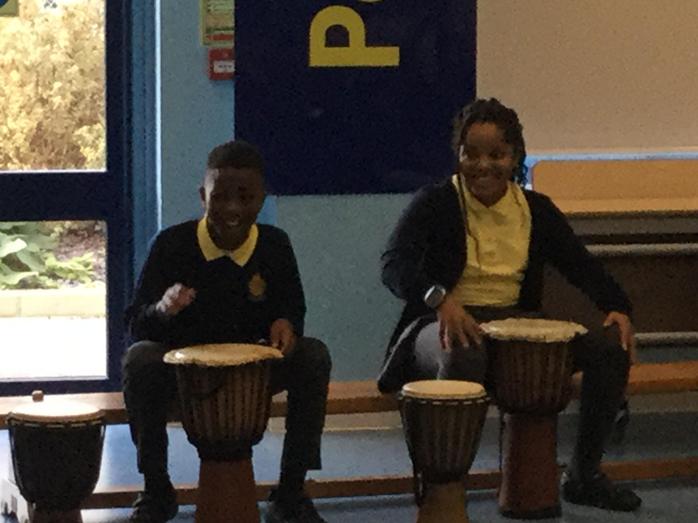 It was lovely to catch up with parents on Monday. Your continued support with learning is appreciated. Thank you.

If you have anything you would like to discuss, I am available at the door in the afternoons or by email on rachel.richards@dcvst.org . 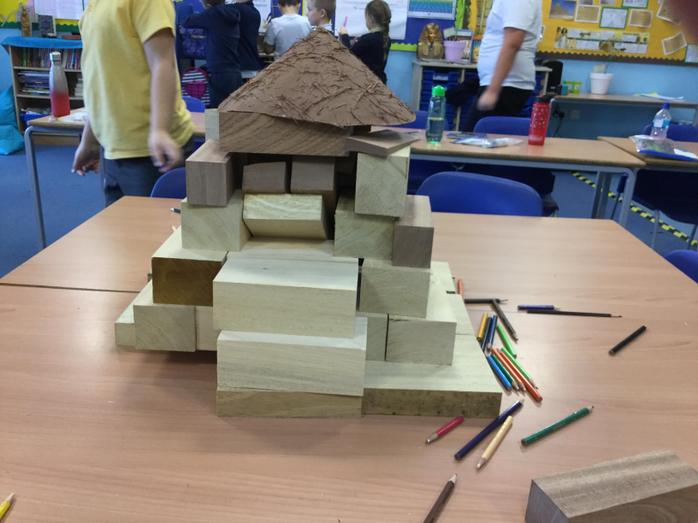